Blustery at the Top 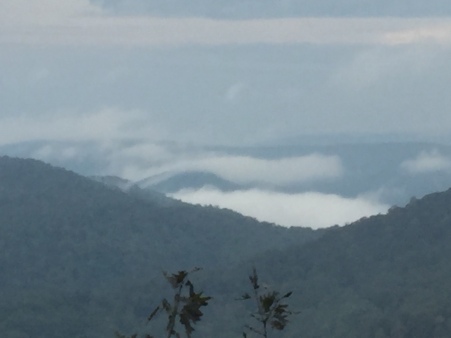 Yesterday, I ventured out early to do a little hiking. I made my way to Bedford and eventually to the Peaks of Otter area on the Blue Ridge Parkway. Or as Calvin calls it – POO (get it, Peaks Of Otter). As I walked up the Sharp Top Trail to the apex of what was once thought to be the highest peak in Virginia (even Jefferson made mistakes), I was in awe of the stillness, the silence (only saw one other hiker coming down on my hike), and the splendor of God’s creation.

The recent storm had knocked most loose leaves down, so few were falling – but the trees were dripping refreshing water left over from the earlier rain – and those drips did hit my head. The hike was a moderate hike on a well maintained trail – constantly walking up slopes or rock hewn stairways. At the apex, the wind was quite strong, blustery I would say, but it allowed for breaks in the mist so I could view and snap some amazing shots of cloud covered mountain tops in the surrounding area.

The rocks at the top have a historical connection to Washington DC. The stone Virginia contributed to the Washington Monument came from this crop of rocks. This was way cool.

Several thoughts crossed my mind as I reached the top. First was that our plans, our goals, are often seen through defective human insight. Many thought Sharp Top was the highest, but it wasn’t. We often make plans and have visions based on incomplete facts. And while we can only work with what we know before us, we need to always be willing to adjust to truth. Now, this is connected to truth from man’s perspective, and man’s perspective is limited, albeit ever growing. But there is a truth we have been given that does not change – the Word of God. Yes, our understanding may change, our point of view may change, but God’s truth is truth – and our God is immutable and never changing in character and truth.

Second, it takes effort to reach the top. Okay, Sharp Top isn’t the toughest trail I’ve done, but it was uphill, steadily uphill, and slippery surfaces from the rain and mist. I needed proper equipment (My Salomon shoes were excellent) and at least had to be in somewhat decent shape. Some people took a short cut (there is a bus route that will deliver you to about 1/3 mile from the top) due to health or young kids. However, as the old marketing slogan said – getting there is half the fun. I enjoyed the hike, loved the calves burning, and felt like I accomplished something after exiting the trail head upon my descent. In our lives, we need to see the joy and satisfaction that comes from labor and hard work. We also need to understand reaching goals doesn’t come from listing goals. You need to put in the effort.

And lastly, we all need breaks at times – a sabbat – a rest and time away. It might be alone (as this hike was for me) or with friends and family. And rest doesn’t always mean a lack of exertion – this day was restful and replenished my soul as I spent time in God’s creation, talked to Him (even out loud, I was alone for most the time after all), and returned renewed.

What are you doing to renew yourself in the Lord?

And with that, I will leave this blog until tomorrow – where I will talk a little about Lisa …