A Preacher, A Revolutionary, An Educator … An American 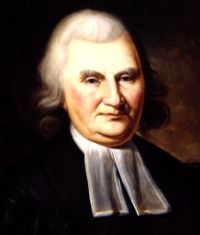 He was the only active preacher at the 2d Continental Congress. Born in Scotland, trained at the best schools, wooed to America, served as a Presbyterian pastor in New Jersey, and the became the president of the College of New Jersey – which would become Princeton University. He was an outstanding orator that was first neutral in the cause for independence – but later joined the movement and preached for the separation of church and state, religious liberty, and American independence.

In the debate in the Continental Congress, on independence, he was asked if he thought America was ready for it. Witherspoon’s response was epic … in his opinion it “was not only ripe for the measure, but in danger of rotting for the want of it.”

He then became the only active pastor to sign the Declaration of Independence.

But his adventures were not over. He had his student body evacuate from the College at the advance of the British army. Later, he returned and rebuilt the College from the near devastation caused by the British.

After the war, he fought to make sure the government had the authority to abolish slavery – for this too was important to him.

Today, this blog post has no real challenge, but is just a snapshot of one of our Founding Fathers. May we remember the great price that was paid.

Whatsoever State among us shall continue to make piety and virtue the standard of public honor will enjoy the greatest inward peace, the greatest national happiness, and in every outward conflict will discover the greatest constitutional strength.

Christian Life, This Day In History