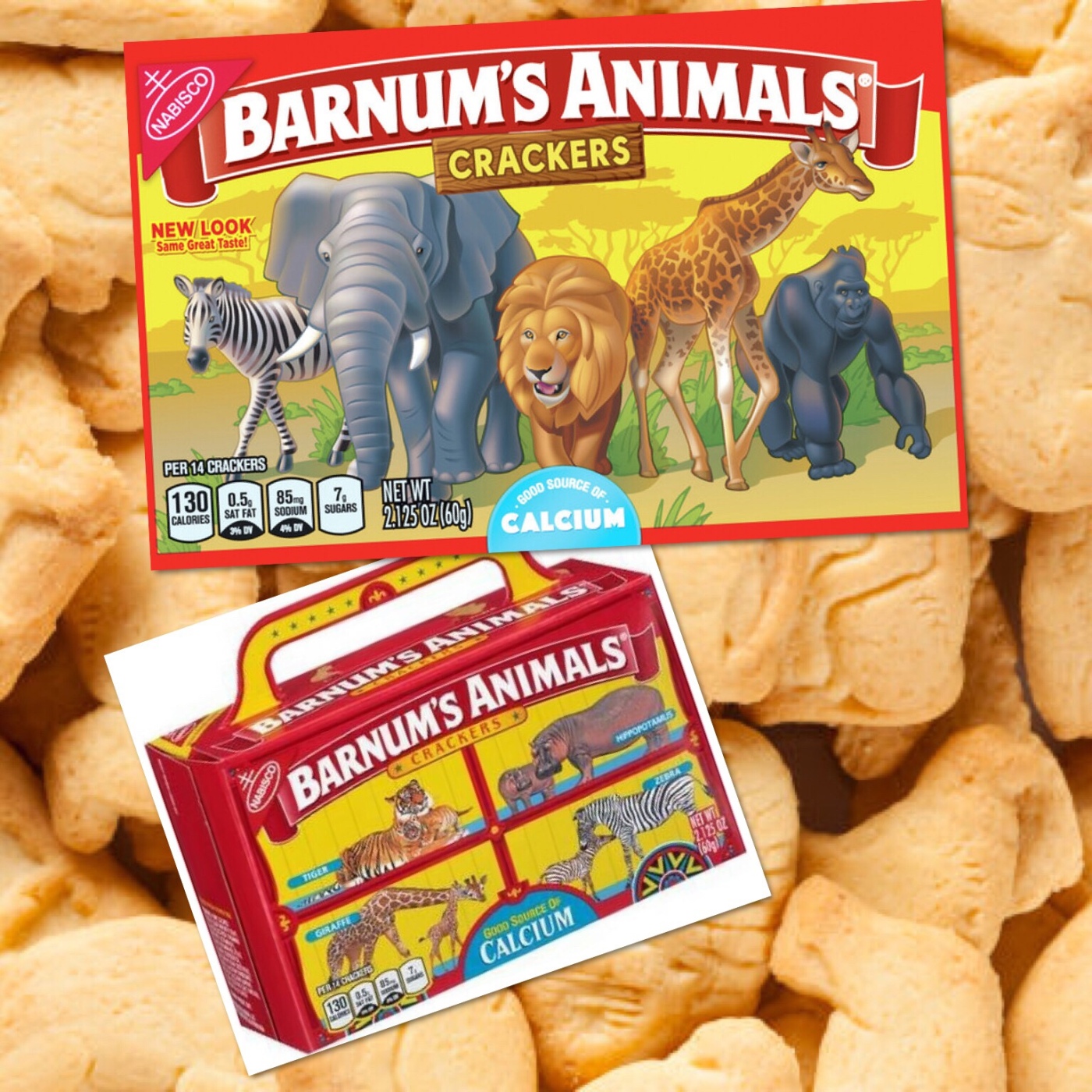 According to sweetoothdesign.com, animal crackers (and cookies) date back to the 6th or 7th century. During the Julfest celebration, animals were sacrificed to the gods – for hope of a mild winter and early spring. Poor people could not afford to sacrifice animals, so they made tokens – animal-shaped breads and cookies. Let’s move forward in our time warp. Victorian England had popular crisp biscuits (cookies type items) and some were shaped like animals. They exported this idea to this side of the pond and companies like Stauffer’s began making animal crackers on 1871. And in 1889, animal crackers were made for P.T. Barnum’s Circus. The boxed edition began in 1902 and has been a staple ever since. I too have sacrificed many a Barnum Animal Cracker to the god of my sweet tooth.

For over a century, this quaint little box, designed as an animal traveling boxcar, with a string to carry it, has delighted little children, and bigger children too (like me). Yes, there have been some collector boxes along the way, but over all, the box design has remained the same. Now, whether due to a modern marketing strategy of freedom and humane treatment of animals – or due to pressure from PETA and other organizations, who knows. The fact that the Barnum Circus closed in 2017 didn’t help either. But this is the summer where Barnum’s box will change and the animals have been freed from their cages.

Now the animals are still in a red and yellow box – but no more cage/boxcar design. The five animals (zebra, elephant, lion, giraffe, and gorilla) are wandering side by side on a grassland (like that would happen!). And you can see acacia trees in the background (normally seen in Africa or Australia).

Change happens. Life continues to move forward. Sometimes change is not received well (can you say IHOP to IHOB and now still IHOP?). Sometimes it is welcomed with open arms. But no matter, change still takes place.

While pastoring a church a few years back, a former member visited and said they loved the fact that their old church never changed. Ouch. I had striven to modernize approach, use current songs, offer a contemporary service, updated the A/V, and more. But maybe what they were referring to was the fact our message, a Biblical sermon, and clear message of the Gospel (God loves you, Jesus died for you, and forgiveness is offered) is what never changes. I’ll take that with a smile.

However, I wasn’t completely correct earlier. Not everything changes. God never changes – He is immutable. The same yesterday, today, and forever. And because of that, I can trust Him. He is always faithful. And I can believe the promises that are made in scripture.

So in this world of chaos, change, and free roaming animal crackers, I can trust God loves me, is for me, and will never leave nor forsake me. And that is something that makes this journey called life doable.

Now, excuse me, I am going to sacrifice an edible animal or two. Join me.

– the box was designed as a Christmas tree ornament (also around Juletime).

– Over 8000 miles of string is used every year in packaging.

– There have been 54 animals designed. Nabisco has used 37. But the box today has 22 crackers with a possibility of the 19 animals still in rotation.

– The most current animal added was in 2002 – the koala. It was added by popular vote.

– The monkey is the only animal to have worn clothing – all others are as God made ‘em.

– The head is the most common first bite.