It started in the dark, early hours of the morning. I headed out towards Goshen Natural Preserve. A trail called Jump Rock. But the beauty hit me even before I got there. Once off I-64, I traveled the back roads. Splendid farms, rolling hills, cows, and the sun breaking over the mountain tops.

Then I travelled along the Maury River, there was some awesome shots of nature. 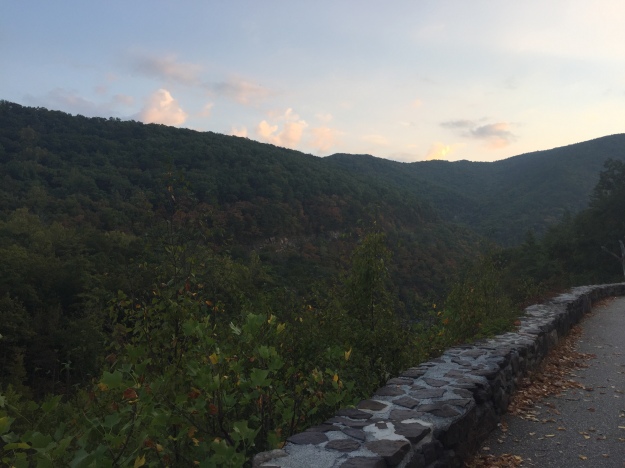 Once I discovered the empty parking lot to the trail head, I parked and headed to the swinging bridge that took pedestrians across the river. I guess the parking lot was empty for there was a sign noting the bridge was closed for repair. It said the Goshen Pass bridge was closed. I wasn’t exactly sure it meant this one, so I gingerly walked across. That’s me, a daredevil. I don’t ever remember walking across a swinging bridge, so across I went. 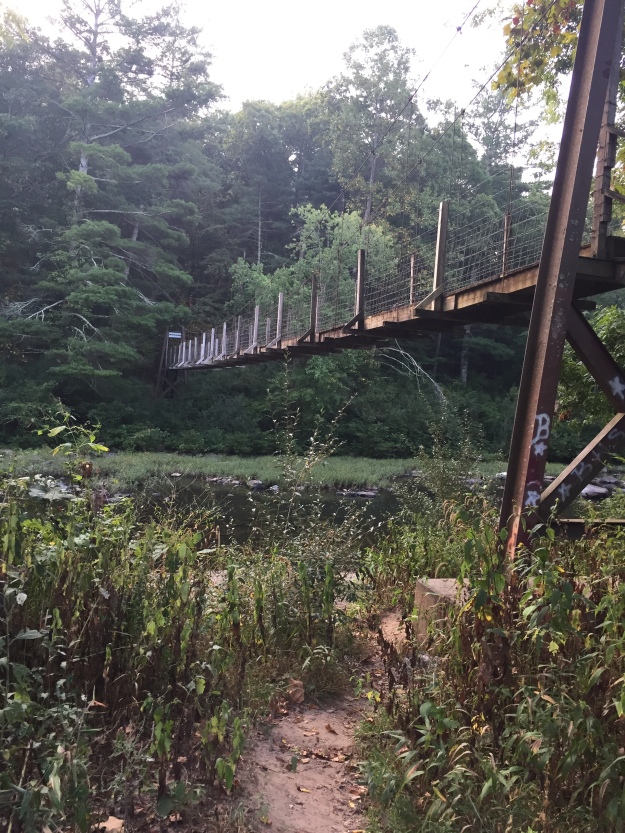 I had not charged my phone all the way, so I turned it off to save for spot checks and pics at the summit. This meant less pics along the way. Within a mile, I saw deer running away and rabbits leaping across the path. There were signs of bear (that which they left behind), but no bears were spotted today.

It was a pretty step climb. About 2500 feet in about two miles. Few switchbacks and some very sharp angle trail at points.

The leaves were just beginning to turn. Lower altitudes showed lots of yellow; and the higher you go, the leaves were turning red. The trail was marked well at times, but not so well at others. I followed a blaze, but I soon discovered it was not the regular trail. With a Boy Scout reservation near by, I think many short cut trails had formed over the years.

PegLeg Pete and I made it to the summit, (I think, since phone had died, And the blazes stopped, I had to guess at this) and enjoyed the views, a bit of early lunch, and a rest on the rocks.

About 8 miles, some good to great views, but pretty steep at times. I saw no one until I got back to the swinging bridge. A family was enjoying water fun in the river.

I did take one summersault tumble on a slippery rock on the trail’s descent, but I almost always take at least one tumble – it’s the way I roll (literally).

On an exciting note, this is the last hike photos on my iPhone 6. My 11 should arrive in two days – longer battery, and much better camera.

I wonder what will be the first trail my iPhone 11 will photoblog?