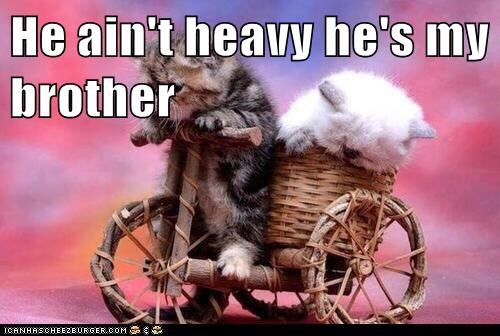 Sometimes a song sticks in my head. You know what I mean. It keeps playing on a loop and I find myself humming, singing, and even skillfully playing my Les Paul air-guitar to the shocked looks of those nearby. All this happens with the music not being heard anywhere else but inside my head.

For the past few days, it has been He Ain’t Heavy, He’s My Brother. It is a soulful, encouraging, and challenging song of helping our fellow journeyer along our shared path. I hear the smooth voice of Neil Diamond. Maybe you hear the Hollies, or Olivia Newton John.

The song, or portions of its lyrics, have been used in movies dating back to 1941 in Spencer Tracey’s sequel to Boys Town, called Men of Boys Town to the movie Rambo 3. The history of the phrase goes back even further, to 1884. A book, The Parables of Jesus, tells a story of a little girl carrying a big baby boy. A person asked if she was tired. With a surprise, she replied, “No, he’s not heavy; he’s my brother.” It has been used by orphanages across the globe, tied into statues, and more.

The original recording sounds little like the version we know today. The lyrics are about all that would be recognizable. The Hollies took the original recording, sped it up, and made history in its 1969 release. It got to #7 on US charts. Trivia note: the piano player on that Hollies hit was a young musician named Reg. He later went on to new heights and is known by his more familiar name, Elton John.

What’s all this about? Lots. We live in a world where so few people look out for their neighbor. It’s a world of ‘mind your own business and move along’. It’s a world of look out for #1 – yourself. But recently in my little corner of the world, I’ve seen people lift each other up, care for their neighbors, and sharing the burdens of those around them. From collecting to almost $100,000 for the mother who lost her husband and one of her daughters in a horrific fire, to collecting for a family struggling to pay for oil to heat their home in these frigid winter days. From visiting shut-ins who are living all alone, to everybody helping to clean up a church building to get it ready for Sunday.

Maybe it’s country life vs city life. Maybe it’s those who’ve been carried giving back now that they can carry. I don’t know. But it does encourage me.

What an amazing world we could have if we would spend more time building each other up than tearing them down, spend more time carrying and caring for others than avoiding and neglecting. While we’re on our way, why not share. The road is long, so very long.

Today … where can you help someone?

The road is long
With many a winding turn
That leads us to who knows where
Who knows where
But I’m strong
Strong enough to carry him
He ain’t heavy, he’s my brother

For I know
He would not encumber me
He ain’t heavy, he’s my brother

It’s a long, long road
From which there is no return
While we’re on the way to there
Why not share

Post Script. Some have mentioned (I will not give my wife’s name) they are concerned about my writing style being messy, having grammatical faux pas, and an occasional difficulty in following my stream of consciousness. Scientist have shown intelligent people are messy (a messy desk is a sign of intelligence). I read that on the web so it has to be true. So this is my burden to share, why not share. But honestly, I do type slower than my mind goes and I apologize to all grammarphiles out there. And thanks for reading. Life gets muddy.