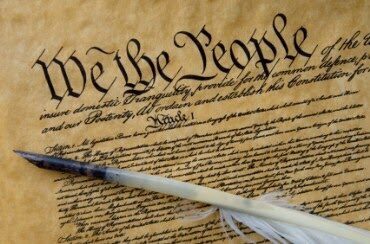 There was a problem. People were arguing about their voice being heard. Weaknesses in the laws yielded political unrest. Reform was being called for. Some were saying government needed an overhaul.

Armed mobs stormed the towns. Politicians were arguing, lines had been drawn in the sand, and tempers flared. Some deals were finally made, compromises reached, and in the end … the great experiment was born.

Not much has changed in our world. Wouldn’t you agree?

September 17, 1787. On this day in history, in Philadelphia, Pennsylvania, 39 delegates signed the Constitution of the United States of America. Three branches, checks and balances, framework of the federal government, and the start of over 200 years of a light to the nations.

I remember memorizing the Preamble in school. Do they still require that?

The debates were vicious. The two sides were far apart. I’m not sure if rioting and looting took place … but 1787 might have a lot in common with 2020. The arguing didn’t stop with the ratification. Within two years, ten amendments were added. We call them the Bill of Rights. More have been added through the years.

I am certain America has her problems. Then and now. But I am blessed to be an American. We have a messy history, a messed up present, and an uncertain future. But the ideal of the Constitution and the following amendments are noble …

Sometimes it seems the fulfillment to these promises have fallen short. Let me tell you a truth … people disappoint. But God doesn’t.

I am working through Max Lucado’s Unshakable Hope. The reminder that our God is a Promise Maker and a Promise Keeper make life unshakable. With Him, I have hope, I have surety, I can trust Him, and all else really is secondary. That’s a truth I would sign any day.

I hope you know His promises. For there we find Unshakeable Hope.