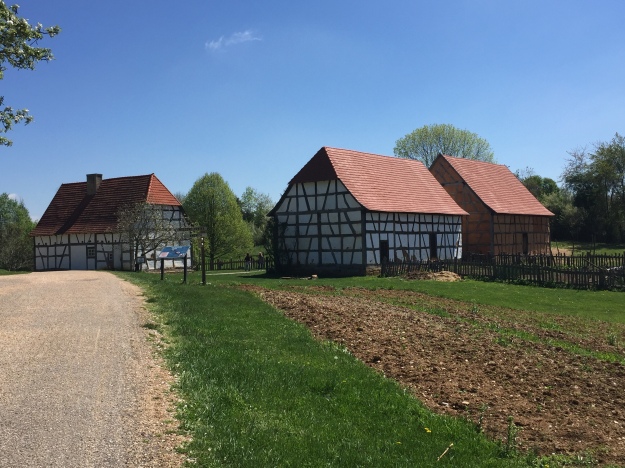 I haven’t done the Ancestor.com. I haven’t researched extensively the Estes clan through the centuries. But, I do know a little. From what I know, we trace back to northern Italy where we were pretty well off. (There’s even a library with our name … look here). That’s also why I probably like pasta and pizza way too much.

But we kind of messed up. From what I’ve been told, we tried to get into politics so they kicked us out of Italy, and took our land. We floated around Europe, had a few marry royalty here and there; but we weren’t the type to settle down, so my kin headed west … and ended up in America, Missouri to be more exact. But even then, we floated around – with Roy & TW ending up in North Carolina … Mount Airy (or better known as Mayberry). Then my dad moved, and moved, and moved, and even moved some more. And so have his kids.

Monday, I went to the Frontier Culture Museum in Augusta, VA. It had some wonderful exhibits of how African, English, Irish, and German farm and residential cultures impacted American farms and frontiers. The European homes had been transported and restored to their original architecture. It was cool to see how we came to be who we are today. Now that I am in a more agrarian environment, I see some of that culture front and center.

There are those that will follow us and be influenced by our culture, our worldview, our way of doing things. What are you doing about it?

We can try to start fresh, we can try to run from our past heritage, and we can try to create a new legacy for those that follow us, and to some degree – that can happen. But it is uncanny how we see our heritage impact the way we continue to live.

We parent the way our parents parented. We have been programmed, to a degree, by 18 plus years of culture and influence. We often like similar things (fishing, sports, reading, etc) or believe similar world views (politics, faith, etc).

One — we can run from our past, but it still impacts us. We can build on its strength and try to eliminate the weaknesses, but we rarely can ignore it. So learn from it so you can make a difference in the second point.

Two — we are leaving a legacy. There are those that will follow us and be influenced by our culture, our worldview, our way of doing things. What are you doing about it? Make the most of this. Strive to be the best you can.